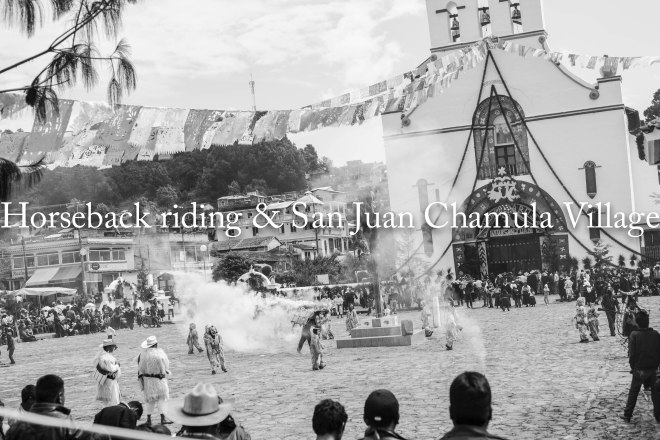 It was my first time horseback riding but I wouldn’t really call it horseback riding it was more like rock climbing on a horse. When we started off the trail it was pretty flat and we were going slow. Next the trail becomes smaller and more trees branches in the way. After that we were climbing up and down on rocks. This was not something I was prepared for yet it was exciting and challenging. When we finally reached the road I wanted to go faster. I had the horse at a running pace now. I managed to hold on but when the guide passed by on his horse one my German friends horse started to run too but he fell off. He was ok just a few scratches.

We reached the top of the hill where the village of San Juan Chamula was and tied up our horses there and walked down to the town. This village is native to the Tzotzil which are an indigenous Maya people. We heard some fire works going off and our guide said, “They do this to let people know in nearby towns to come to the market.” There was some type of festival going on this day mixed in with the sunday market they hold every Sunday. There were many little shops set up selling fruits, veggies, hot food, and clothing. Some kids dressed in clown/ devil mask running around in a circle after what looked like a bull with fire works attached to it. The men wore black or white wool tunics called chujes. It was something have never seen before.

The San Juan Chamula Church is the center of the village. There’s some weird sacrificing that goes on here. The sacrifice of a chicken is held in the church here. I did not get to see this happen. Also exorcism and healing ceremonies take place here in San Juan Chamula. I was taking a step back in time visiting this town.

The ride back on the horses wasn’t as bad compared to on the way to San Juan Chamula. Unfortunately we came back with three of us instead of four. One on my German friends decided to take a ride back in a colectivo. He had enough of that horse he was riding. By the time we were back I had enough of the horse too.